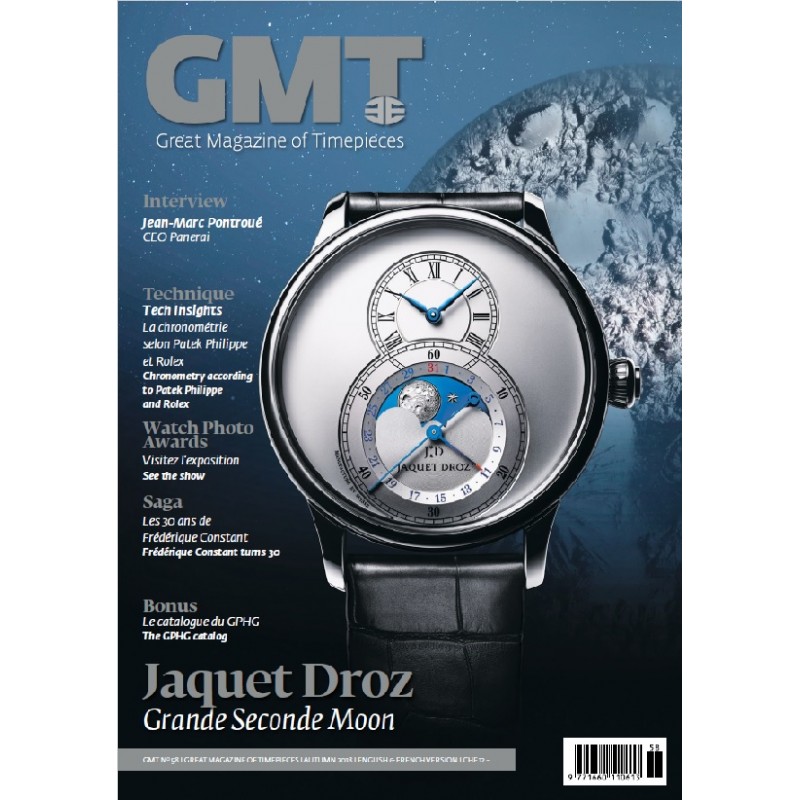 Ever-present in watchmaking as in life itself, black is also the October theme of the Watch Photo Awards : an initiative launched by our publishing house and echoed by media around the world for the past six months. The 60 watch photos selected since May (respectively themed The Blue, Sport, Holidays, On Two Wheels or Four, Food and Drink and The Black) are on show from November 1st to 11th at the Musée d’art et d’histoire de Genève, as part of the Grand Prix d’Horlogerie de Genève (GPHG) exhibition for which GMT is also serving as media partner. Congratulations to the devotees of fine watchmaking whose photos are thus published and displayed. While black is the guiding thread of this fall issue, the GPHG will be very much in the limelight at the prize-giving. GMT presents the competition favorites and gifts the official catalog to its readers, who will be able to follow
the ceremony live on worldtempus.com, which will provide an analysis of the results. Our editorial team is also turning the spotlight on several iconic collections that are nonetheless underestimated by the public at large. The one appearing on our magazine cover, the Grande Seconde by Jaquet Droz, shows the moon in a whole new light… Recurrently featured in the GPHG, the Octo Finissimo by Bulgari submits its skeleton version to the discerning gaze of our in-house watchmaker. In an entirely different style, the Heart Beat collection symbolizes the rise of a champion of affordable watchmaking celebrating its 30th anniversary this year : Frédérique Constant. And if the mention of these twin themes has sparked thoughts of Luminor and black dials, the new CEO of Panerai will be shedding light on these brand signatures. Speaking of which, the faces of millions of fans light up at the mere mention of two legendary names : Patek Philippe and Rolex. Many of them may however not be well acquainted with these respective approaches to chronometry (precision timekeeping) taken by these Maisons, a field that we analyze in a dedicated article. Finally, we cannot resist giving a nod to the man who has contributed to making watchmaking shine brighter than ever over the 45 years, including through developing all-black watches : Jean-Claude Biver, who has announced that he will no longer play an operational role in the LVMH’s watch division. May the light shine on !