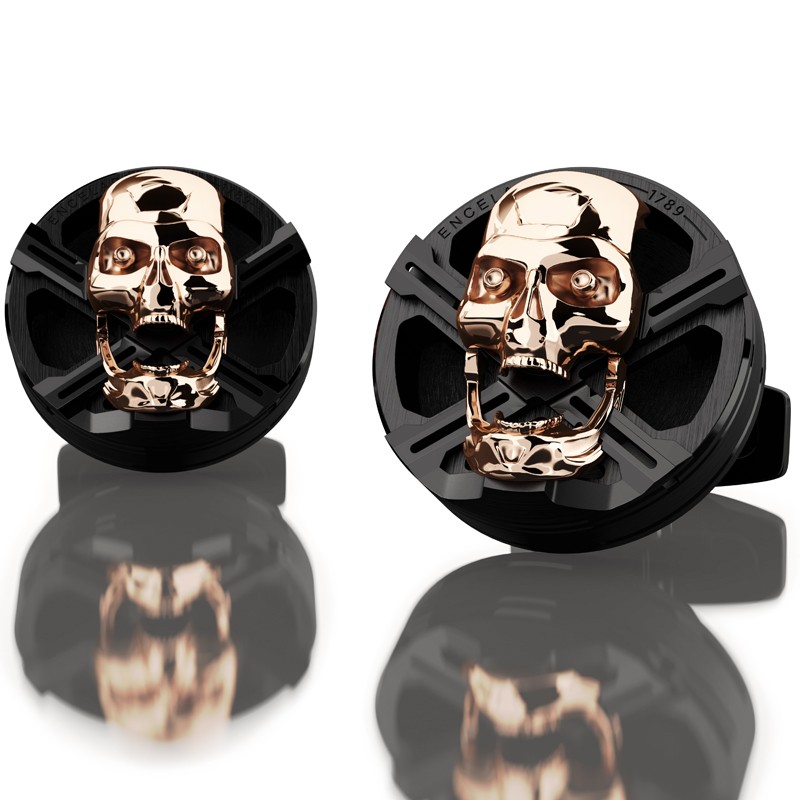 These quirky Skull cufflinks in black PVD / red gold PVD are by the Swiss label Encelade 1789, a brand that epitomises luxury and elegance. Its exclusive accessories are always innovative, of very high quality and extremely desirable. The name Encelade 1789 comes from the French for Enceladus, Saturn's natural moon that was discovered in 1789. That was also the year of the French Revolution. Encelade 1789 celebrates both events, one with its logo and the other for the way in which it revolutionised the world of luxury accessories.

Cufflinks are accessories that are not always seen and are usually static but Encelade 1789 has taken the humble static cufflink and revolutionised it in its own unique way. Every cufflink in its collection is meant to move with your wrist, inspired by the inner horological movements of clocks and watches. The Encelade 1789 Skull cufflink allows this movement to turn a graphically worked skull through 360 °. The skull is one of mankind's most evocative images recurring widely since ancient times, on these precision made cufflinks it brings a touch of anti-conformism to your formal or corporate wear.

The Skull cufflinks in black PVD / red gold PVD are made from 316L steel, a high-grade metal that resists corrosion. The steel is sandblasted and bevelled before the cufflinks are carefully assembled by hand and given a highly polished satin finish. They also feature a unique sliding clip that allows perfect closure whatever the thickness of the shirt's fabric.